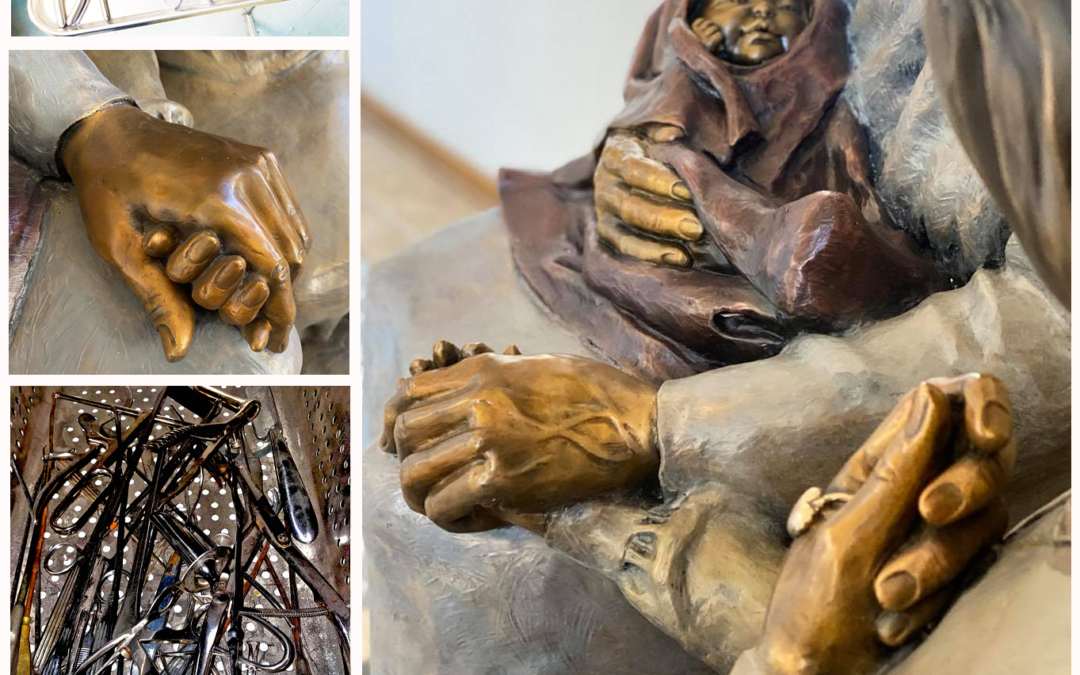 The steel tools gleam and clatter as I sift through the tray. They are long, mostly – curved like a woman’s body and smooth like a woman’s skin. Except for the ends, which are sharp as a man’s betrayal. My betrayal.

The tools are long because they were made to reach into a secret place. They are clean now, shiny even, but there are perforations in the bottom of the tray so blood could run out — the blood of a girl I loved and a child I did not. I put the tools back into the tray and wash my hands.

The years cover, but they do not erase. We were young and afraid. She went to an abortion clinic, and the tools did their work. They reached into a secret place and undid what I had done. But of course, it’s not that simple. Some things cannot be undone.

And maybe that’s why I’m telling you this, and why I work in a place that used to be an abortion clinic, and why I occasionally touch those shiny tools in the perforated tray. Because abortion does not undo.

I don’t know how it changed the girl. I did not see her much after that, compounding my betrayal. Of course, I know how it changed my son – I have always felt it was a boy – how he was torn from the secret place. The abortion kept my secret, which is what I wanted at the time, and I can’t tell you what I lost because, of course, it is lost. My betrayal of those two tore something from my own secret place, and the edges of that hole are still jagged after all these years.

Abortion does not undo. It does something that nothing can undo. It makes us the author of irreversible violence. It destroys the one person who could have forgiven us. It creates a sorrow for which no sorrow can atone.

This is a hard truth, as hard and sharp as those tools in the tray, but it is not the only truth.

Outside our building, a man and woman sit together, holding hands, and the man is holding a baby. It is a peaceful scene, but there is more to this story. The child has recovered from a terrible injury. The woman has apologized for a terrible mistake. The man who holds them is Jesus.

It’s only a statue, but it tells an important truth. Abortion does not undo. It tears precious things from secret places, and it leaves a jagged hole. Jesus does not undo, either, but he does restore – invites us to move from the darkness of shame into the light of forgiveness.

Like the woman in the statue, I look toward Jesus in wonder. I have never understood why God would forgive me, why he would suffer to atone for my betrayals. I still don’t understand it, and some days I struggle to believe it, but I know it is true.

At LIFE International, we affirm the great value of every human life. We also affirm God’s inexhaustible grace to anyone who confesses failure and asks for his forgiveness.
Our partner ministry, Deeper Still, provides care and counsel for men and women who have participated in abortions, helping us move from dark secrets into honesty and freedom and forgiveness. In Michigan, contact us at https://www.deeperstillwestmichigan.org, or see https://www.godeeperstill.org for other locations.
“He does not deal with us according to our sins, nor repay us according to our iniquities. For as high as the heavens are above the earth, so great is his steadfast love toward those who fear him; as far as the east is from the west, so far does he remove our transgressions from us. As a father shows compassion to his children, so the LORD shows compassion to those who fear him. For he knows our frame; he remembers that we are dust.”
-Psalm 103

“If we claim to be without sin, we deceive ourselves and the truth is not in us. If we confess our sins, he is faithful and just and will forgive us our sins and purify us from all unrighteousness.”
-1 John 1

← The Little One The Soldier's Servant →