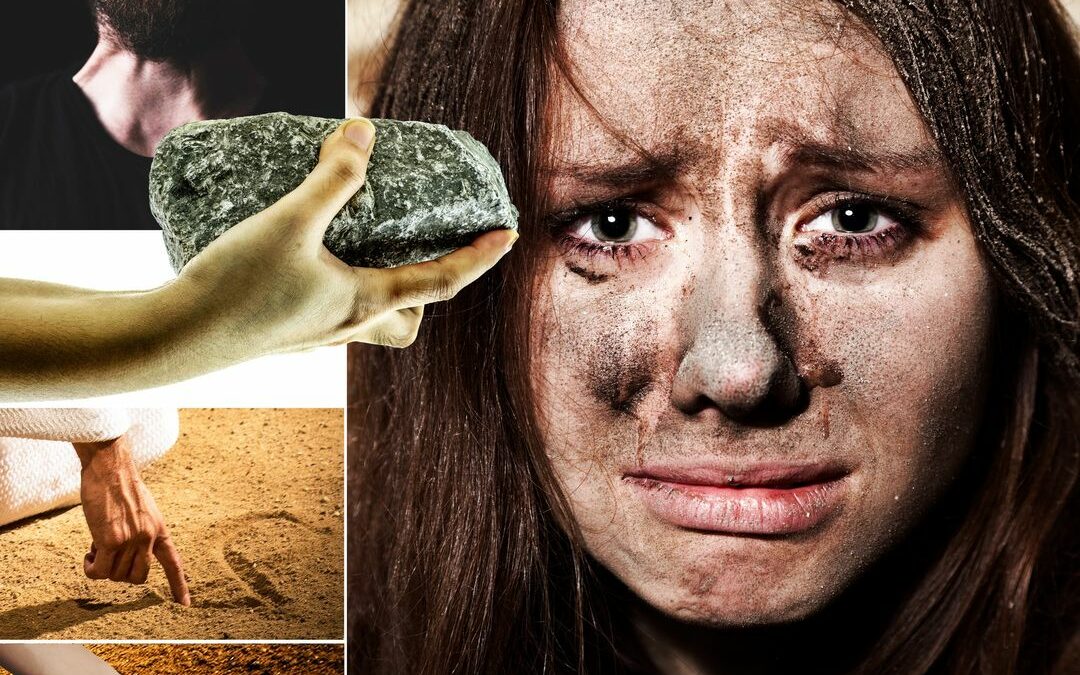 The warmth of his kiss, the soft glow of the candle – all smashed in an explosion of light and noise. A stranger had burst through the door, shouting, and ripped open the curtains, exposing our nakedness.

In that instant, I knew many things I had tried to forget. As my lover backed quickly away, I knew what he called love was not love. As he exchanged a look with the stranger, I knew he would slip quietly from this, leaving me alone to pay.

He had seemed the answer to my sorrow, but the beauty of our private darkness turned shabby in the light. I knew my life was over.

Others stomped in as I rushed to cover myself. A young man grabbed my elbow, yanked me roughly out of the room, barefoot and sobbing, blinking in the harsh daylight.

“He’s at the temple,” The oldest one said, and I saw from his robe that he was a Pharisee. “Go quickly. Tell them we’re coming. Have the bag ready.”

They hardly looked at me. They said nothing to me. The expression on their faces was not outrage but a strange, quiet satisfaction.

“Let’s see him wriggle out of this one,” the young man said. “He’ll have to turn his back on the law or the rabble who follow him. Either way, it’s over.”

The others grunted agreement, and I realized their trap had been set not only for me but the new teacher, the rabbi they call Jesus. I heard about their hatred for him – heard about his great kindness and all the people he had healed. And I would meet him like this? And play a part in his destruction? Until that moment, I had been only afraid, but now I was ashamed.

“Kill me now! Have your blood!” I screamed.

There was a crowd outside the temple. My captors barked orders, shoved people aside, pushed on into the center, and there he was. He looked up as they threw me to the ground before him.

“Rabbi!” the oldest one shouted. “Help us, please! A terrible thing has happened. We were warned about this woman and, sure enough, she has been caught in the very act of adultery. Now lead us, Rabbi, as Moses instructed. She must be stoned!” As he spoke, another man dragged a heavy bag toward him. The old man pulled a rock from the bag and tossed it near Jesus’ feet.

The crowd fell silent. Every eye seemed to dart between the rock, the teacher, and me. For a moment, no one moved, then Jesus slowly kneeled near the stone and looked at me. “My daughter, is this true?”

His eyes were my punishment, for he looked at me long and sadly, and I knew he loved me, whatever he had to do.

He picked up the rock and paused as if weighing it. Arms and legs shaking, I closed my eyes and braced myself to be struck. Then I heard a thump as the rock fell to the ground, and I moved my hands from my face to see him dragging his finger through the dust, slowly forming the letters of my lover’s name. He looked up at the men who brought me and tilted his head in a silent question, but they said nothing.

“You have heard her confession,” he said as he scratched other letters into the dirt, and another name appeared. “And those who sin deserve judgment, yes?” He stared at my oldest accuser, whose eyes grew wide as he looked at the name, then slowly stepped backward, disappearing into the crowd.

Again, Jesus kneeled and began to write – other names, numbers, words I did not understand. “So, you who are without sin, look at me,” he said as he stood, scanning their faces. “You may have the honor of throwing the first stone.”

I heard shuffling sounds behind me. I cringed and braced myself again, all the while staring into his gentle face.

A few seconds later, the crowd began to murmur, and Jesus kneeled beside me, held out his hand. “Has no one condemned you?” he asked, helping me up.

I looked around, confused. “No one, sir. They… they’re all gone!”

“I don’t condemn you either,” he said. “But listen, my dear. Sin multiplies sorrow. Do not follow it.”

At LIFE International, we are thankful for God’s great mercy. We have all fallen short of what we know to be right, but he does not condemn us. He invites us to turn back to him, and he longs to forgive and restore us.

If we confess our sins, he is faithful and just and will forgive us our sins and purify us from all unrighteousness. – 1 John 1:9

This story is a dramatization of an event recorded in John 8.