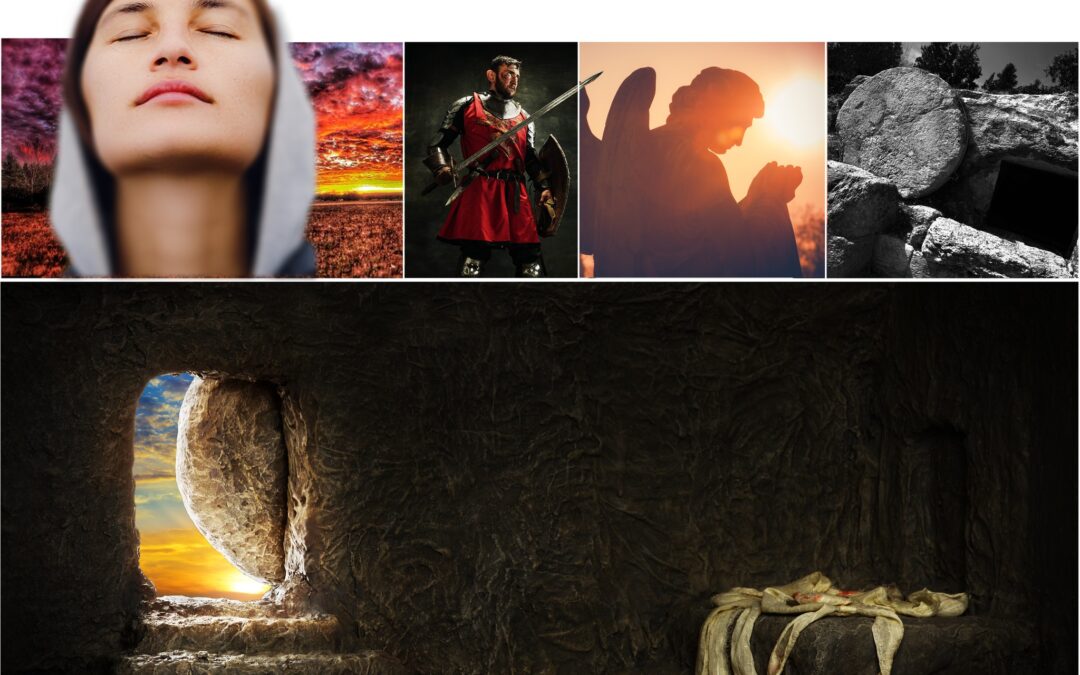 He bends low over the body and stares into a lifeless face. He did this once before, many years ago. That face had been beautiful, the body strong and perfect. This body is different. Mutilated. The face is swollen and exhausted. It is the body of his son.

The Father touches the dead hand, gently fingers the wound there, kisses the bruised face. “My son,” he whispers, “my precious son.”

Many had watched him die; another tragic event in this tangled world. But his Father knew it was more than that: A tragic and beautiful untangling.

In the first days of this world, he had formed two strong and perfect bodies, breathed into them the breath of life. He loved the man and woman he made, but they became prodigals, leading their children away into darkness and cruelty, and there was no way for them to come back.

Well. There was one way.

And that explains the battered corpse before him.

Soldiers guard the tomb. One jabs the smoking log with his spear, producing a small shower of sparks but no heat. He curses, turns to see his comrade quickly scrabble to his feet, eyes wide.

“What…?” he exclaims, pointing. In the sky, a trail of light stops, swells, bursts among them, turning nighttime into day. The soldier puts his hand to his eyes, blinded, staggers backward as two burning figures begin to roll away the stone.

The Father’s nod brought angels streaking through the atmosphere, sent soldiers streaking from the grave. There would be an end to sadness now, for it had all been done. He leans over his beloved son, smiles, breathes into his tortured body the breath of life.

I had not slept, had stumbled back to the tomb again, not yet out of tears. But this morning, the cave stood open, a great black hole gaping like the great black hole in my heart, and I knew they had stolen him from us again. I saw a man and fell to my knees, pleading for help, then I noticed a wound on his foot.

I knew the voice, and a chill ran up my spine. I raised my eyes, and my mouth fell open; my hands flew to my face.

His face was alight – the broad smile he sometimes had with children – and his eyes were sparkling. “Come now, Mary. You act like you don’t know me!”

My mouth was still open, and tears rushed down my face. “But…” was all I could say.

“It’s all right,” he said. “It’s really me, and you know I told you about this,” he chided gently as he helped me up and dabbed my face with his sleeve.

“Yes, you said that already,” he laughed. “Mary, it’s all right now. The hard work is finished. It’s morning!”

“Oh, yes,” he said, nodding. “I told you I would. But that’s all over now. I have made all things new. Death was a place, but now it’s a door, and Father is in the next room, waiting. We’ll soon be done with tears.”

He has returned to his Father now, and angels stare as he walks past, the red of his wounds bright against the white of his robe.

It was for this that he endured the cross: The joyful men and women surrounding his throne, the ocean of prodigals he has carried home. “Worthy!” they cry, shouting and singing in every language and yet, somehow, together. “Worthy is the Lamb who was slain.”

At LIFE International, we honor Jesus, who willingly endured a cruel death to purchase our forgiveness. On the third day, he took up his life again and eventually returned to his Father, where he is preparing a place for those who love him.

“For God so loved the world, that he gave his only Son, that whoever believes in him should not perish but have eternal life.”

This story is a dramatization of events that occurred on the day of Jesus’ resurrection, recorded in Matthew 28, Mark 16, Luke 24, and John 20.