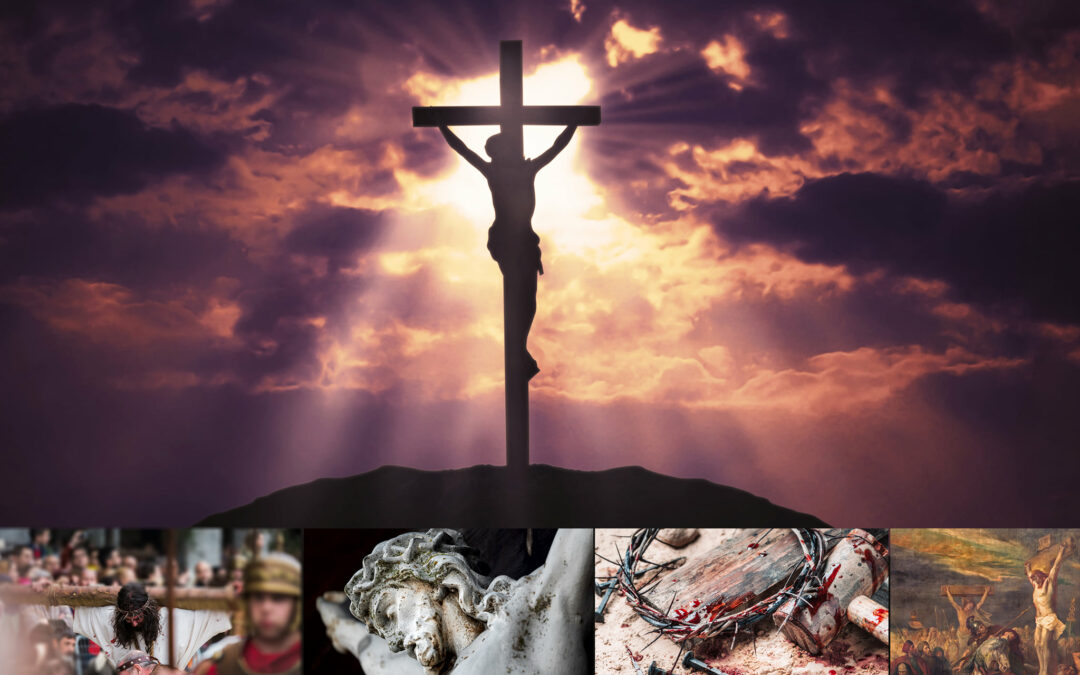 Claudius held down the man’s arm, although he did not struggle. I held the point to his wrist and raised the mallet, flung it down. The spike made a thud, driving through skin and muscle, a small clink as it reached the wooden beam. The Jew gasped, exhaled a long hiss but he did not scream.

Claudius raised his eyebrows hilariously, nodded, and grinned. I scowled and spat, dragged my hand across my eye to wipe away a spurt of blood. Another denarius wasted.

Clank. My mallet rang louder this time as the spike sank into the beam.

Clang…. It sang like a bell now, announcing a death.

As I stepped over his chest to pin his other arm, he raised it from the dirt, laid it on the beam, and opened his hand. I gave Claudius a look. I have pinned many men to crosses, but I had never seen that. I looked at the Jew’s face, saw his jaw working against the pain, but his eyes were open, looking at me.

I looked away, spat again, pulled the other spike from my pocket. Clink… Clank… Clang… It sounded strange this morning. Loud and lonely. You could never hear it over the prisoner’s howling, but this prisoner did not howl. His body quivered and his breathing was harsh, but he did not cry.

“Drunk,” I said, glancing at Claudius.

“Oh, no you don’t,” he protested. “He hasn’t been out of my sight all night, and he didn’t take the gall this morning.”

“Well, those thorns in his head then, and the lashing. He’s half dead already.”

I looked at the man quickly, then looked away. Those eyes, looking at you like he knows you. They should be closed. He should be screaming.

I felt a little sick as I nailed his feet, tried to make it fast and clean. His eyes were closed now, fighting the agony. His breathing deep and trembling.

Claudius held out his grimy paw. I pulled out the coin, tossed it on the ground. “How did you know?” I asked.

“I told you, I watched him lashed. Hardly a sound,” he said, shaking his head emphatically.

I stopped walking and the part of me that felt sick sprang up my throat. That was the look. I had seen many men die, many men who deserved to die. But you could see it in his face. This one did not. And he was brave. Nonetheless, he would die, and I would see to it.

I looped a rope around the beam above his head, that we might pull the cross up and into the hole dug for it. I leaned over and said quietly, “This next part will be worse. It will go more quickly if you don’t struggle.”

I don’t know why I spoke to him. I had spat on many prisoners, pinned them like butterflies on a board, shoved in my spear to finish them off. Whatever pity I once felt was long gone. Maybe he was innocent. It didn’t matter. I had a job to do.

I stood, gave the command to pull, and we lifted him above the growing crowd. There were many women there, wailing and holding their hands in front of their faces. Many men, too, but they were mostly sneering at him and mocking.

A few minutes later, a soldier arrived with an order from Pilate. Claudius was right. A sign was to be hung over his head. It said he was king of the Jews.

“Ladder!” I commanded and took the sign, climbed up. “This says you are a king,” I said, pounding it into the beam.

He gathered a breath and looked at me, said, “Yes.”

He pulled himself up to get another breath. “Not here,” he gasped, “Not yet.”

I chuckled and hung the mallet on my belt, started to climb down. “I’d say you’re out of time, king.”

He looked me in the eye and drew another breath. “I forgive, Caelus….” And he nodded at me. “Forgive.”

I nearly fell off the ladder. He knew my name? I brushed Claudius aside when I came down, walked away, and stared down the hill, away from the crowd. Who was this guy, and why did I feel so…? I wanted to get away from there, to get a drink. I turned back and watched him for a while, his mouth open like a fish, fighting for air. The crowd was yelling about the sign. A man walked right up to him, laughing and pointing, asked why he didn’t come down.

My hand tightened on my spear. “Soldier!” I shouted to a young man going past and pointed to the heckler. “Move him back! Then bring me wine.”

When the soldier returned, I took the wine and walked back, looked again at the chest heaving above me. I stabbed my spear into the sponge and soaked it in wine, raised it carefully so he could reach it. He looked at me, turned his head to touch the sponge, wet his lips, then shook his head and turned away.

The morning dragged on and the crowd grew, screaming that he was weak like a lamb, hanging there so quietly. Obedient like a slave. But they were fools. Only a lion could endure such agony in silence. Only a ruler could so rule himself.

I stared at the wet stains in the sand under his body and realized that something was turning in me. I had pinned him here with these hard hands, but now my heart was pounding in my ears, louder every hour. I looked up at him, hoping he would look at me again – see something in me that was like him. I wanted him to come down. I wanted him to live. I wanted to talk to him, to take him home to meet my wife. I wanted, at least, to take away his pain and let him die in some peace.

And then the sky grew black, as if the sun could not bear to see what we were doing to him. The hill began to shake, as if the earth was made wild by his blood.

Women screamed and huddled together. Men scattered, looking to escape. I grabbed the cross and stared up at him and he was looking up, too, searching the skies. He cried out, his great courage suddenly gone. Tears were streaming down his face, and his breathing was loud and ragged.

“Eli!”, he shouted. “ELI?!” He tossed his head back and forth, as if looking for someone who had been there a moment ago. The voice that had whispered to me “forgiven” now sobbed “forsaken!”, and I drew my hand across my eye, praying the skies would answer him.

But they did not, and a look of incredible surprise and sadness came into his face, as if he finally realized he would be dying alone.

“Ladder!”, I screamed, and poured what was left of the wine over the sponge. I grabbed my spear but, no, not that. I saw a staff on the ground and shoved it into the sponge.

He was in great agony, his chest heaving, his eyes closed. And then, before I could raise the staff to his lips, his eyes opened and he spoke again, no longer afraid.

“Father,” he said, breathing heavily. “It has all been done. Here is my spirit”

I saw his head fall and the light leave his eyes. I dropped my helmet and kneeled in front of the body, trying to understand what I had seen. I didn’t know what he had done or said before this day; but here was a king I would follow anywhere. Here was the Son of God.

He was despised and rejected by mankind,

a man of suffering, and familiar with pain…

Surely he took up our pain and bore our suffering,

yet we considered him punished by God,

stricken by him, and afflicted.

But he was pierced for our transgressions,

he was crushed for our iniquities;

the punishment that brought us peace was on him,

and by his wounds we are healed.

At LIFE International, we honor – above all other things – the person and sacrifice of Jesus. He made us and gave himself for us, enduring the punishment and isolation from God that we deserve so we might have peace.

This story is a dramatization of his crucifixion, which is recorded in Matthew 27, Mark 15, Luke 23, and John 19.

← Via Dolorosa Breath of Life →