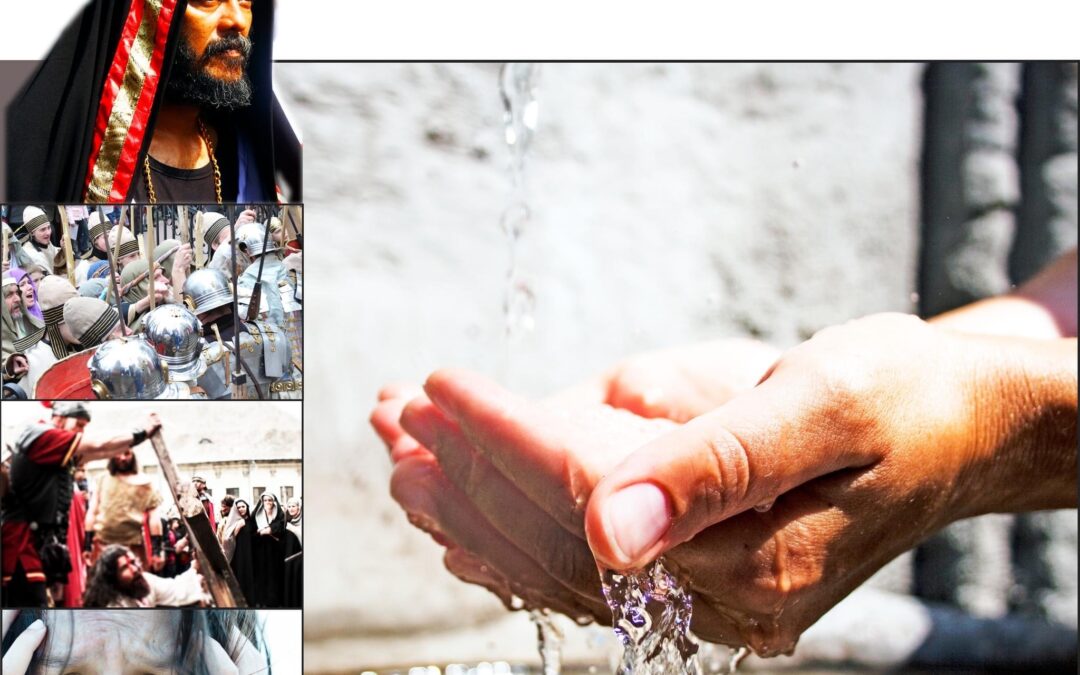 I’ve been a judge too long for that trick. I saw their faces as they dragged him in – their sneers and burning eyes, the angry spittle on their lips.

“He’s a criminal!” they sputtered, shoving him toward me with sharp jabs. Well, maybe he was, but I saw more. They spoke of religion, but it was hatred that brought him here.

His face was interesting. They had roughed him up, I saw from the black eye, the trail of blood running down his cheek. He would be defiant or depressed, as all prisoners were – either full of his own hatred or miserable in his shame. But I couldn’t tell which. He met my eye, held it, neither angry nor afraid.

I jerked my head away, suddenly uncomfortable. I am a judge. I see everything, but something was happening here I couldn’t see, and that made me angry. They hated me, as I hated them. They hated him and wanted me to hate him. All that, I could easily see, but he just stood there, looking at me, bleeding – an island of peace in this swirl of hate.

“He rebels! He says he’s a king! You’ll kill him now if you’re any friend of Caesar.”

I turned to the man, astounded. He looked at me as before and said nothing.

“Leave us!” I commanded the priests and watched them herded from the room. I studied the man with new interest. “Don’t you defend yourself? You’ve heard what they say about you.”

He held my eye, still silent.

“But what of it?” I said to him. “Are you a king?” I could almost believe it. His calm suggested a great strength barely hidden.

“Not what you call a king, but yes, I have a kingdom. I am here to tell the truth, and those on the side of truth listen to me.”

“Truth!” I snorted, shaking my head. “Whatever that means.”

There was a clatter – footsteps running in the hall, and my wife burst into the room. She stopped to stare at the man, her mouth open.

You must understand that Claudia is everything I am not, everything this cruel city is not. Her tender heart sometimes annoys me, but it is my one haven in this vicious world. I went to her, put my hands on her shoulders to steady her trembling.

“My dear husband,” she pleaded, gripping my arms, her wide eyes staring into mine. “I have just dreamed of this man, and I know he is innocent! Please, have nothing to do with this!”

As I held her, I had the eerie sense of being surrounded. Five minutes ago, I had been confident. In charge. I looked at the man again, felt a trap beginning to close around me.

I went back to my seat, put my head in my hands. Think, man, think! There must be a way… and suddenly it came to me. I smacked my thigh in genuine relief.

“Take him to the gallery,” I told my guard, and already I could hear rumbling from the crowd gathering outside. I walked slowly to my official chair and sat down, still congratulating myself on a brilliant solution.

“Listen!” I commanded, raising my hand, waiting for their clamor to subside.

“Do you see this man?” I pointed to the bleeding face. “I was asked to execute him!” I said this to generate sympathy. How they hated it when Rome killed one of their own.

“But I have looked into the matter, and I find him innocent! He has done nothing worthy of death!” I hesitated, to enjoy their applause, but there was none.

Surprised, I continued to my main point. “Every year, I make you a gift, and I do so now. I will free this man if you like! Either him or… Barabbas.”

This was my stroke of genius. I had many trials and prisoners to choose from, and Barabbas was the worst kind of murderous pig, as repugnant to the Jews as to Rome. They would beg me to release this harmless teacher. I gave them no choice.

And then it happened, the moment that plays in my mind, over and over. I saw the priests in front turn to the crowd, gesturing and shouting, and the mob began to scream. “Barabbas! Barabbas! Give us Barabbas.”

I quickly stood and stared, my mouth hanging open. “B-but this Jesus…” I shouted. “Is he not your king? Surely, you want me to free your king?” It came out as a question; such was my confusion.

“Crucify him!” the crowd bellowed. “Crucify!”

I glanced to the side, saw Claudia sobbing, a shocked expression on her face. The guards glanced around warily, swords drawn, as the mob pressed forward.

“You want me to crucify your king?” I shouted again, astonished.

“We have no king but Caesar!” they roared. I heard, but I did not believe it. I didn’t think they could hate anything as much as they hated us, but I was wrong.

I looked at the man. He looked at me, shook his head slightly as if he understood. I stepped to the water bowl, plunged in my hands, and raised them high, still dripping. “You came here for my judgment. Well, this is my judgment. This man is innocent! His blood is on you!”

“His blood be upon us, and upon our children!” a priest shouted, and the mob thundered its approval.

I paused for a moment, scowled into the sea of angry faces. They know he is innocent, and they want him dead. Well, so be it. Empires don’t have the luxury of being high-minded. He is just one man, and too expensive to save.

I looked at the centurion, then pointed at the prisoner and waved him away, shaking my head. I tried, Claudia, I tried. I am not a god.

When they had gone, when the dust and shouting faded and finally disappeared, I stared into the empty courtyard, my brain still ringing with the shouts. I walked to the column where he had stood, stared at spatters of his blood on the floor.

At LIFE International, we honor Jesus, who paid for our wrongdoing and made possible our forgiveness with his own terrible suffering. Especially during this season of Lent, we remember events in Jesus’ life leading to his ultimate sacrifice for us.

“He was pierced for our transgressions, he was crushed for our iniquities; the punishment that brought us peace was on him, and by his wounds we are healed…He was oppressed and afflicted, yet he did not open his mouth…By oppression and judgment he was taken away. Yet who of his generation protested?” -Isaiah 53

This story is a dramatization of Jesus’ trial before Pontius Pilate, recorded in Matthew 27, Mark 15, Luke 23, and John 18 and 19.

← The Choosing Via Dolorosa →