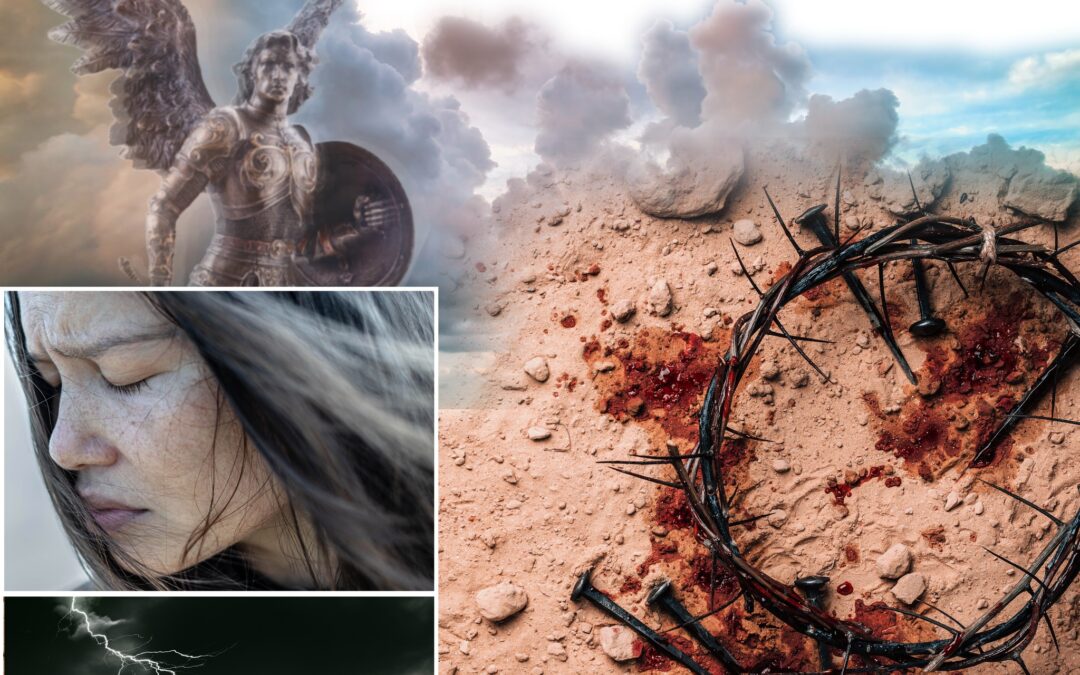 The wet slap of the whip. One red splash after another, speckling the air, slowly painting the ground, slowly plowing his now shapeless back. Meat and bone, shreds of skin. Blood welling, soaking, trailing away into the dirt.

His army, pleading, inches forward but he says no.

Soldiers mocking now. The rap, rap, rap of staff on skull, driving down the crown of thorns. Harsh laughter at this king, loud gatherings of spit.

Bright warriors lean from heaven, eyes wide, mouthing ‘No!’ He shakes his head to stay them.

A squawk of wood on stone. Two rough beams, the furniture of death. He presses them to his torn back, strains ahead, leaves a crooked trail of dust and blood.

Knee wobbles, foot slips. The splat of flesh on stone, the smack of cross on flesh. Snap of whip and snarl of curses. He struggles up – to knees, to feet, teeters, sets himself beneath the cross.

Screaming crowd; laughter, wailing. A woman steps out, moaning, touches her veil to his face. Blood, sweat. A soldier barks, shoves her back.

Thump of wood on earth. Another fall. Whip whistles through the air, bites. The prisoner, clumsy, tries to stand. Soldiers growl but see he is spent. Grab a thick man from the crowd. Put the cross on him. Prisoner stumbles alongside, lurching, weaving.

A voice calls, as from another time. He forces his eye open, sees a face twisted by sorrow, a sword piercing her heart. Mother.

“What shall I say?

‘Father, save me from this hour’?

No, it was for this very reason I came.”

At last, the hill. The final sacrifice.

A ripping sound where blood had dried, knitting flesh to cloth. Scrape of prisoner dragged through dirt, naked to the cross. A soldier stands on his arm, another drags the nail across his wrist. He feels it stab, hears the clank, hammer slamming down, down, until the pin is through him. He and the cross are one.

He is theirs to protect, but they are his to command, and, aching, they obey.

A rasping voice. Too much thirst, too little breath, but clear enough to hear in heaven.

At LIFE International, we honor Jesus who — though he had every power and no sin — laid down his power and became sin for us.

At any moment during his terrible suffering on what we call Good Friday, he could have stopped the abuse and punished the abusers. Instead, moment by moment, he chose the punishment that brought us peace and the wounds by which we are healed.

“Put your sword back in its place,” Jesus said to him, “for all who draw the sword will die by the sword. Do you think I cannot call on my Father, and he will at once put at my disposal more than twelve legions of angels? But how then would the Scriptures be fulfilled that say it must happen in this way?” -Matthew 26:52-54

“God made him who had no sin to be sin for us, so that in him we might become the righteousness of God.” -2 Corinthians 5:21

“He was pierced for our transgressions, he was crushed for our iniquities; the punishment that brought us peace was on him, and by his wounds we are healed… -Isaiah 53

This story is a dramatization of events that occurred on Good Friday, recorded in Matthew 27, Mark 15, Luke 23, and John 18 and 19. These events are remembered as the Via Dolorosa – the “way of suffering”.