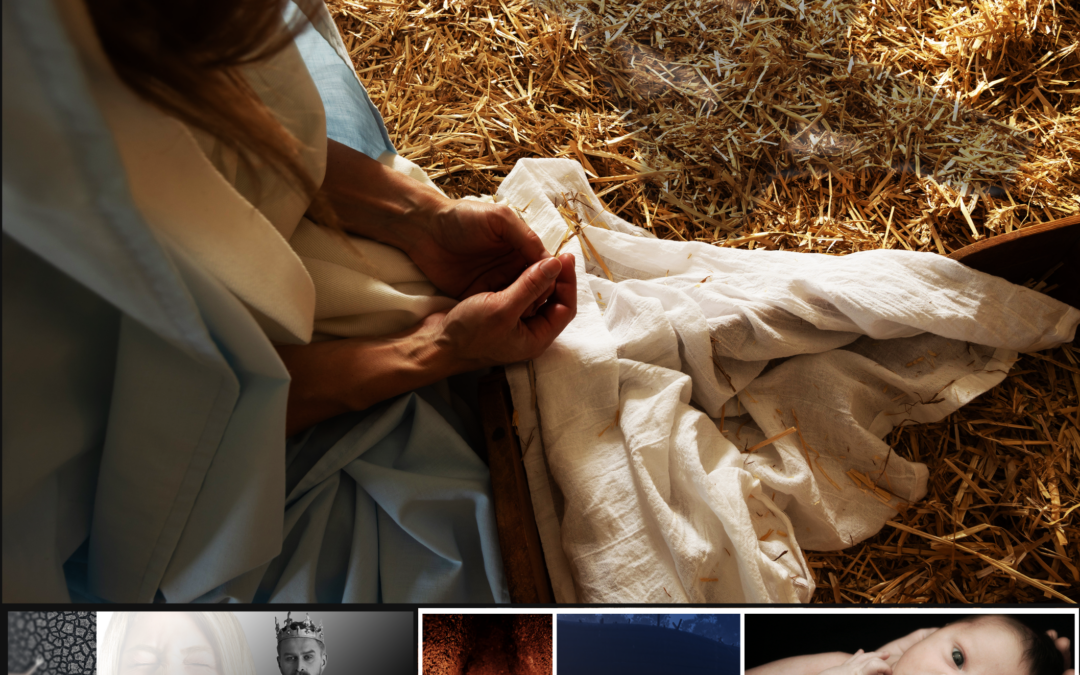 Every ounce of strength, every gasp of breath; she gathers it all, and with one final cry, she pushes the child into the cold world.  A man in rough clothing takes the baby in his rough hands and stares as unpracticed tears run down his face.  He rubs the child with a clean rag, lays him in her arms.

So, this is God, he thinks.  Here with us in this cold barn, this faint flickering light.  Here, of all places, all moments, all people that have ever been in the world.  Here.

After a while, the quiet is shattered by the hollering of wild men racing down from the hills, laughing and shouting, beside themselves with some wild joy.  “Is he here?” they yell.  “Is this the one?”  But ducking under the cobwebbed timbers and coming near to where the child lies, they are changed – stilled by some wild awe that makes their tough bodies drop to their knees, their rugged faces stare in wonder.

She gathers every ounce of strength, every gasp of breath, and does all that is left in her to do.  Trembling, she stretches her hands toward the sky as if reaching for someone, then covers her eyes, presses her face into the dirt.

A few feet away, a soldier wipes the sword against his leg.  A child lies still on the ground, an expression of fear frozen on his little face.  And again, his mother wails.

A voice is heard in Ramah,

Rachel weeping for her children

and refusing to be comforted,

because they are no more.

The king has done what kings do.  It is not people that matter, nor goodness, nor sorrow.  Only that the king be king.  And there was a story going around; a strange story told in stars and ancient books about a different kind of king, born in just this village, not two years ago.  Well, we can’t have that.  Let them wail.

And so, the earth continued on its bleak course, and sorrow reigned more than kings, for the most any man can do – kings included – is to live for a while and then return to dust.  And the child-king?  He is mostly forgotten now, though still on his own strange course.  Still very much alive.

Gasping for breath, he gathers what little strength remains.  His head moves unsteadily, scanning the crowd that has come to watch him die.

They did not know it, but it was for this moment that angels sang, that shepherds laughed and shouted, and wise men brought frankincense and myrrh.  They only knew he was king, not that he would hang here bleeding.  But as the stars and ancient books foretold, he is a different kind of king, come to serve and not rule – come to shoulder our grief and carry our sorrows, to be crushed and pierced for us.

The kings of the earth have finally done to him what kings do, or so they think.  They brought the wood and nails, but he has brought the sacrifice.

Straining to lift his wounded head, he stares into the sky as if looking at someone.  “Father,” he cries. “Forgive them.”

Mary stands nearby and watches this, writhing.  She remembers that cold barn in Bethlehem, remembers Joseph gently placing him in her arms.  She remembers the wrinkled prophets and bright angels, the wild shepherds, and sober wise men – all the mysteries she has treasured in her heart.

The Christ-child had come to them on that cold and holy night – to them of all people – and this is what he came to do.  Glory to the newborn King.

At LIFE International, we celebrate Christmas with amazement and great joy.  Our Creator made himself a human child and so became “God With Us”.  He made himself the costly sacrifice that makes our forgiveness possible.

In the familiar words of John, “God so loved the world that he gave his one and only Son, that whoever believes in him shall not perish but have eternal life.”  We wish for you the great joy of knowing Jesus and his amazing love for you.

This story is a dramatization of events recorded in Matthew 1 and 2 and Luke 2 and 23.

← With Us A Shepherd's Story →