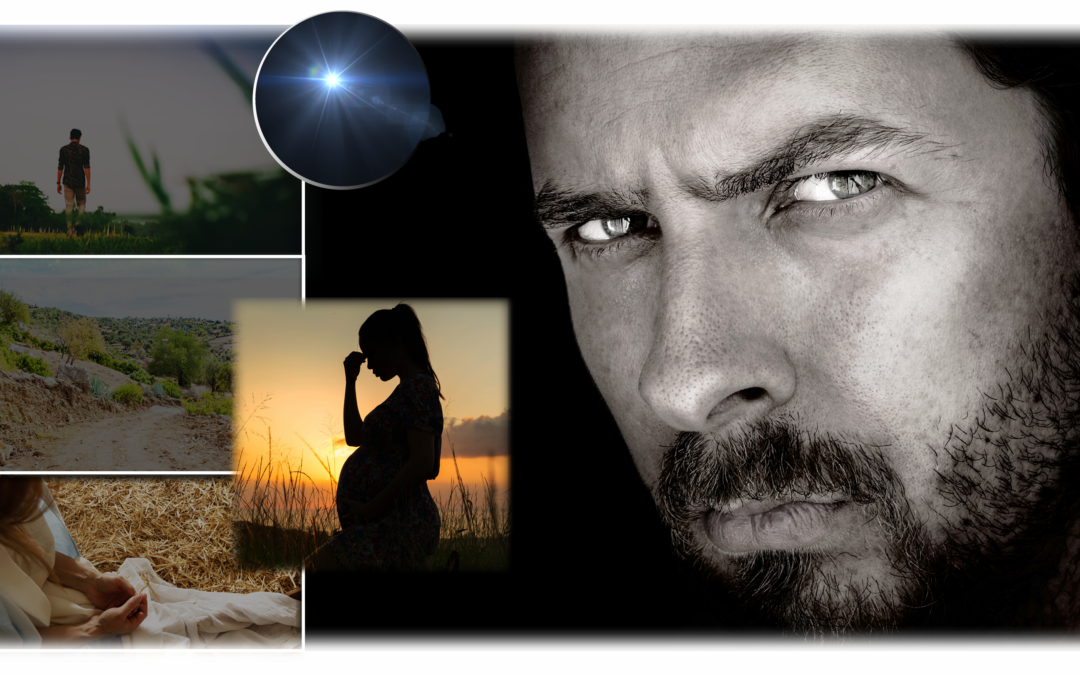 Blood oozed from my knuckles and left a smear on the board I had smashed, but my anger changed nothing.  And I’ll tell you straight off; this is no Bible story – no tidy tale about clean and perfect people.  The girl I loved, the girl I was soon to marry – her belly swelled with a child that could not be mine.

I stormed out of the workshop and wandered for hours through the autumn fields, trying to make sense of it.  She had sawn my heart in two, and my thoughts jolted between the bright hopes of yesterday and the cold, dark betrayal of today.  Even now, I could almost believe her, stare into her beautiful, earnest eyes, and believe with all my heart – but we had never been together, and her pregnancy could not be denied.

Exhausted, I trudged home, having found no answer except that I loved her still.  She had told a beautiful, earnest story to explain the child – a story that proved she had lost her mind.  I would break the engagement quietly, let her have whatever peace she could find as a crazy woman and adulteress.

The next day I was staring at the floor in my cluttered shop, kicking at the sawdust, leaning on a cabinet I should have been staining, when a man walked in.  That is, there was a man standing in front of me, though I had not heard him enter.

“Joseph,” he said, in a voice that rumbled with authority.  I looked up and blinked because he was tall, and his face was bright.  “What she tells you is true.  There is no other man, but God himself is doing this, and the child she carries will be called God With Us.  Now go and bring her home.”

I woke with a start and realized it had been a dream, but somehow, I knew it was all true.  I ran across the village to her parents’ house and pounded on the door, shouting her name.  When it finally opened, I panted out an apology, stared into her beautiful eyes, and begged her to forgive me.

Well, that’s how our marriage started, and in a way, it got harder.  Before the baby came – at the worst possible moment – we were ordered far south to Bethlehem.  The road was long, and her back hurt terribly.  I was thirsty and sore, and we both were layered in dust.  Holy people probably don’t quarrel, but we did, especially after we dragged into town and couldn’t find a place to stay.

The baby was God With Us, but this didn’t feel like a Bible story.  I finally found a barn with enough room between animals for Mary to lay down.  Tired and dirty, we crawled in and collapsed on the straw.  And then her water broke.

Of course, I remembered the angel.  And, yes, I knew something important was happening to us – maybe to the whole world – but I could only think how badly I had managed things, how another man would have done better.

But then the child was born, all bloody and small.  I took him in my rough hands, cleaned him as best I could, and handed him to Mary.

And all the time, a feeling was growing in me that brought tears to my eyes.  This baby was with us, all right.  Not other, better people.  Not smarter, stronger people, but us – tired and dirty as we were, and sometimes crabby.  Poor people and a little lost; strangers in this town.  I couldn’t think why God would make himself a little child and live with anyone.  But here he was, nestled in Mary’s arms.  With us.

I knew he was God, especially after the train of shepherds and angels and stars and foreigners. And the old man and woman at the temple – they had been waiting for him, too – waiting longer than I had been alive.

He was God, all right, and that’s a miracle, to be sure.  But he chose to be with us, in all our want and grime.  And that’s another kind of miracle entirely.

At LIFE International, we honor Jesus, who – though he is God and the creator of this world – became a man, that he might show us his way and better represent us to the Father.  Even more surprising, his human life began like ours, as the merest fertilized cell.  Jesus really is God With Us, having experienced all that we do, from birth to death, and many painful troubles between.

This story is a dramatization of events recorded in Matthew 1 and Luke 1 and 2.