Seventy Times Seven: Forgiving in a World of Rights and Offenses 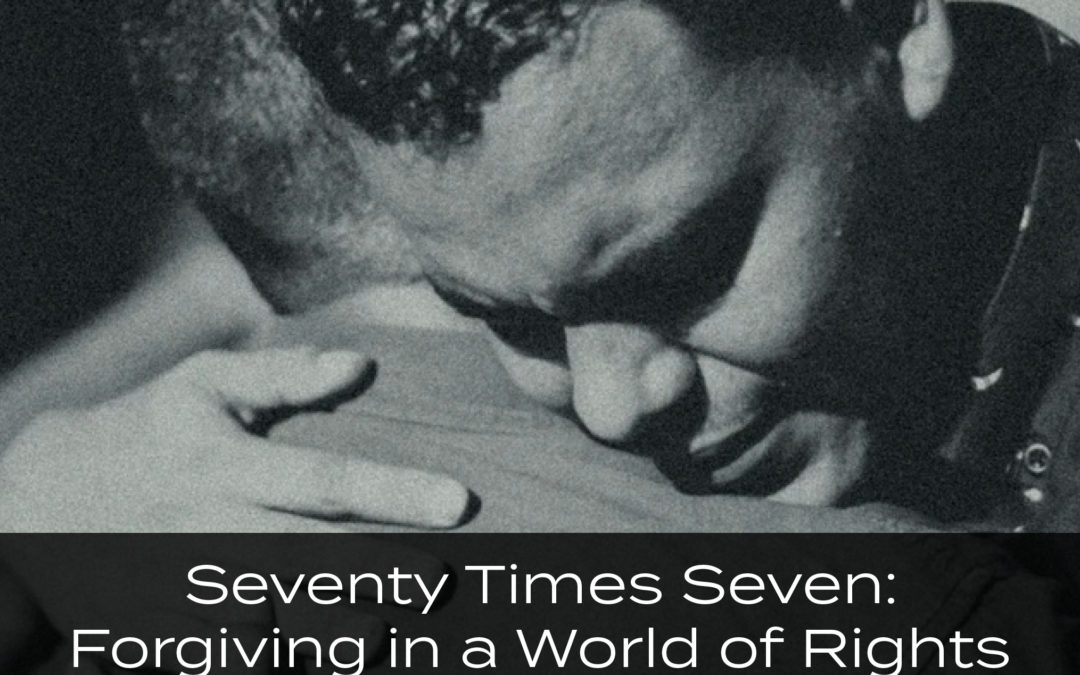 “Lord, how many times shall I forgive my brother or sister who sins against me? Up to seven times?”

Our world desperately needs the example of biblical forgiveness right now. Whether it’s COVID-19, systemic injustice, elections, terrorism, or the debate over wearing face masks, there is no shortage of rising division and anger in society. All one has to do is search “riots” on the Internet to find recent examples – not only in the U.S., but in Germany, France, India, South Africa, Russia, and dozens of other nations. Even as I write this article, there are two major protests unfolding in the world: one in Beirut against the negligent storage of chemical fertilizer that erupted in a massive explosion, and another in Belarus against the reelection of a man who’s been in power for over 25 years.

Two thousand years ago, the same types of anger existed. The Roman Empire brutally crushed its opponents. Injustice and corruption were the norm, not the exception. Drought and war brought death and disease and hunger. Israel, long subjugated by Rome, was a flashpoint for anger and rebellion. The ancient world was as volatile as our own, with a myriad of opinions, tyrants, problems, and vices.

It is within this context that Peter asks Jesus his question about forgiveness in Matthew 18. How many times should we forgive a brother who sins against us? In essence, what does it mean to forgive?

Peter likely thought he was being generous. After all, rabbis taught that you should only forgive up to three times (citing Amos 1, where God forgave the sins of Israel’s enemies three times before punishing them).

Peter’s question follows Jesus’ instructions for how believers are to handle disputes and offenses. Jesus’ commands in the preceding verses seem clear: if a fellow believer sins, the one who was hurt or noticed the wrongdoing should discuss the matter privately. If the fellow believer doesn’t acknowledge or repent of their offense, two or three others are to be brought in to discuss the matter. If the person remains obstinate, the matter is to come before the entire local assembly of believers. At this point, if the person still refuses to stop their negligent and wrong behavior, he or she should be expelled from the community.

This begs the question that Peter was asking… but what if this person repents and asks my forgiveness? What is the extent or limit of my need to forgive this person who has wronged me?

Instead of a tidy response that would fit well in an HR plan or a 3-step book, Jesus’ answer blows Peter’s expectations completely out of the water. Peter thought “Up to seven times” was generous.

“Jesus answered, ‘I tell you, not seven times, but seventy-seven times.'”

If Peter initially thought he was about to get a special commendation for his largesse, he quickly realized his answer had fallen impossibly short.

What did Jesus mean by this? Why 77 times? Well, depending on the translation, you might also read “seventy times seven!” The Greek word “hebdomēkontakis” in Matthew 18:22 literally makes the word “seven” an adverb, and be translated as “seventily seven,” which could indicate either addition or multiplication. Whether Jesus meant the former or the latter (or both), the point he is making is the same!

Jesus went on to tell the disciples a parable about a servant who was forgiven a massive debt, but then went out and had another servant thrown in jail for owing him a very small sum. Through the death and resurrection of Jesus, those who follow him have been forgiven the debt of our sins – a debt none of us can ever pay. With this amazing grace in mind, we should learn to not only forgive willingly, but joyfully and abundantly. There is no limit to grace!

This is a message that desperately needs to be heard right now by our world. We talk so often in our cultural conversations about our rights, about our privileges, the oppressions against us, and the things we are owed. While there is a time and place to discuss these things, our obsession with them has left no room for forgiveness and grace in our dialogue. The result is hatred, anger, and violence. The radical forgiveness of Christ is unique – there is no other religion or belief system that teaches this concept of grace. It is part of the message and hope of life that only Christ can bring! As we talk about things such as injustice, human rights, and grievances, we need to bring this radical forgiveness as seasoning for our conversations (Colossians 4:6).

I’ll leave you with an amazing real-life example from this month that shows what this looks like. This is the powerful testimony of Darrin Ray, a pastor who forgave a $2.5 million debt against a drunk driver who disabled him in a crash. Can you imagine what our world would look like if we learned to forgive this way?

← How A Global Movement for Life is Growing During Lockdown