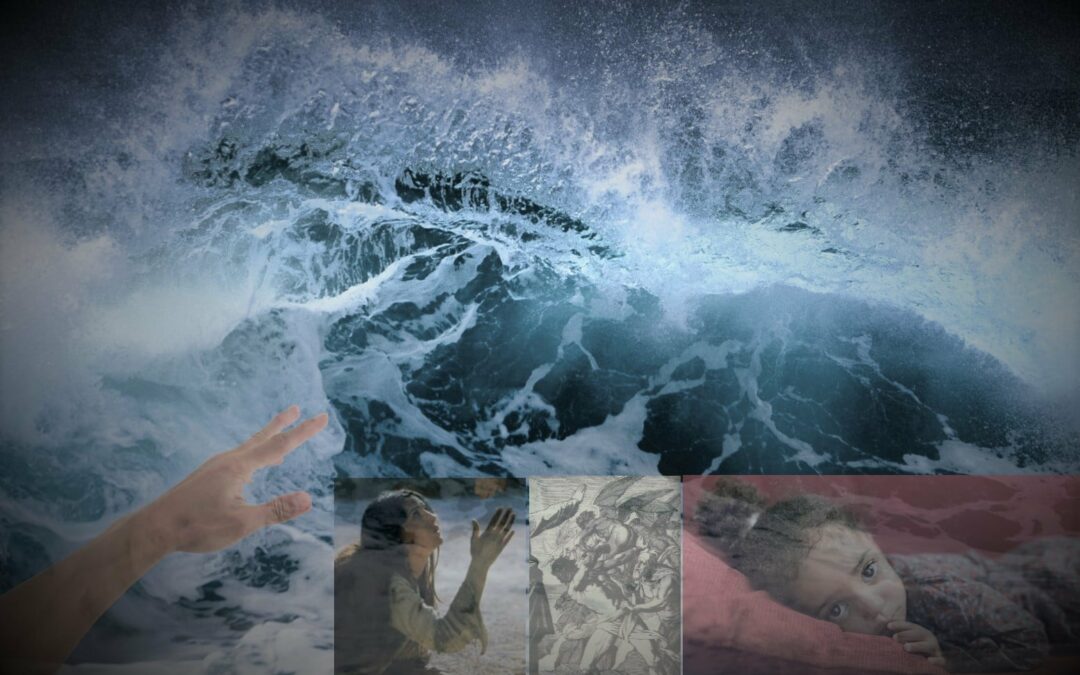 I remember her pushing through the crowd, a desperate look on her haggard face.  She broke through at last, just behind us, and called out but the roaring mob walked on.  She lurched forward, exhausted, stretched out her skinny arm…

A few minutes earlier, it had been another guy, well-dressed, but just as desperate, begging us to help his dying daughter.  And just this morning there had been the lunatic, half-naked and bleeding, screaming something about torture.

It was this way everywhere we went. He was the one to whom desperate people run, people who have nowhere else to go.  We followed him and watched, as amazed as anyone else.  And earlier that day, it had been our own arms reaching for him, our voices screaming for help.  We were far from shore when the storm hit, tossing the boat sideways, white waves crashing over us…

Well, we walked on and, after she touched him, the woman fell behind and was nearly swallowed up in the crowd when he suddenly stopped and looked around.  He said something that confused us, but she knew what he meant.  She crept forward, trembling and guilty, as if she had picked his pocket, then dropped to her knees, cringing.  But he said something that made her look up, then he smiled and took her hand, laughed as she jumped up and twirled away to tell her family.

At just that moment, a messenger ran up to the well-dressed guy.  I could guess what he said because the rich man’s face crumpled, and his shoulders began to shake.  But we kept going, all the way to his house, right through a crowd of people already crying about his little girl’s death.

Jesus walked into the dead girl’s room and when he walked out, she was skipping beside him.  We were not surprised, exactly.  Just stunned.  Stunned as we had been that morning when demons flew from the lunatic, when the great waves fell silent because he told them to.

“Who is this?” we exclaimed, and it seemed as fitting a name as it was a question.  “Who is this?” that demons and storms obey, who brushes aside disease and even death?

At LIFE International, we want to understand this remarkable Jesus – as breathtaking in power as he is in love – and help people around the world understand him.  We want to serve as he did, making known the Father’s heart for life.

(The story above is a retelling of Luke 8.)