I am here to do one thing 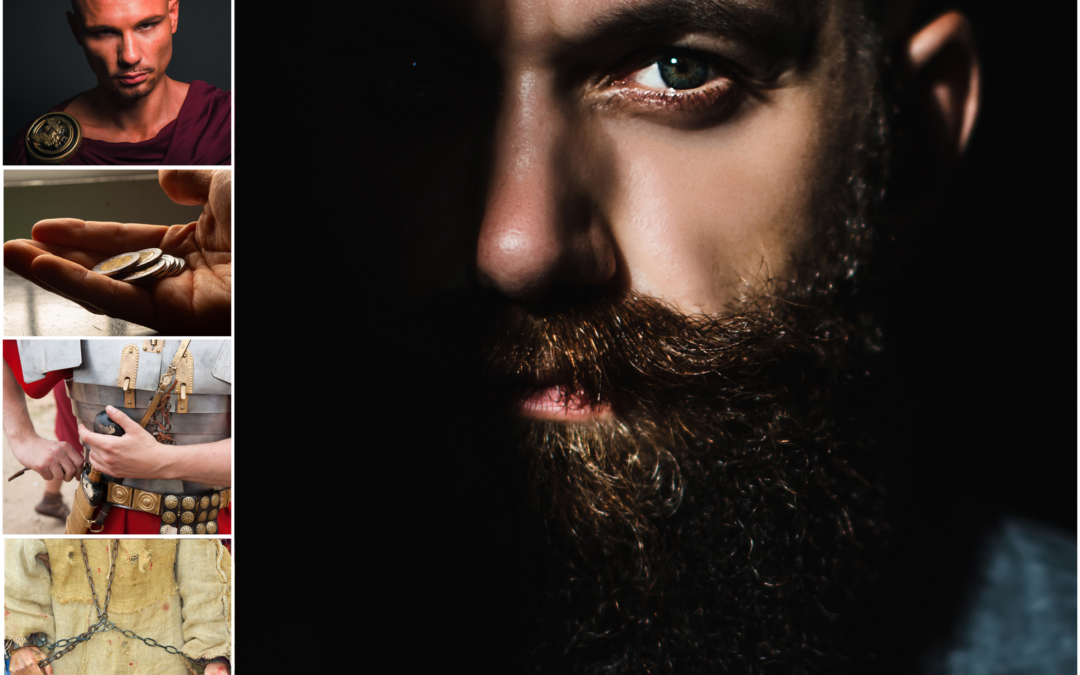 There is a spray of blood on my sleeve, a cold drop of sweat creeping down my spine. Armed men filter past, hands toward the fire, eyes moving in the dim light. I lower my head, keep to the shadows.

I am here to do one thing.

I can see him across the courtyard, hands tied behind his back. An angry voice rises on the wind, falls silent as he replies. Someone steps toward him, arm raised. The crack of the hand striking his face echoes against the stone walls.

He saw this nightmare coming. He talked about it, even wanted it somehow. We argued about that, and he called me… Well, he called me Satan, but I can’t bear to think about that, not yet.

I look down at my recently clean feet and remember arguing with him about that, too, and arguing about whether I would abandon him. We argued a lot lately. Well, I argued.

Four days ago, he rode into Jerusalem as king, and the city roared in celebration. And now he’s in chains? The mob that came to arrest him last night – they yelped and fell to the ground when he spoke, like dry leaves before a gale. Why did he surrender?

Why is the Son of God standing here on trial, choosing to be weak? And why am I here, trembling in the belly of the beast, pretending to be strong?

I watch a soldier walk by, then jump as a girl steps in front of me, tilts her head, meets my eye. She scans my rough clothes in the firelight, seems to stop at the blood. “Hey,” she says in her little voice. “Are you…? Are you one of them?”

Heart pounding, I thrust my hands behind my back, shake my head, and growl, “Of course not.”

I ignore her, look around to see who might be listening, hope she will shut up and go away. It’s not what he would do. I know that.

I promised to do this one thing – to stay with him – a promise that came so easily in the daylight, surrounded by people who loved him. I pull the cloak tight around my shoulders, glance behind, see that I can still reach the gate, can still escape.

As I hesitate, urgent whispers swell nearby. I turn and see trouble; a large man stomping toward me, nodding, his finger rising to point at my face.

“I saw you there, didn’t I? When we arrested him.”

I shake my head as fear rattles in my chest, springs out of my throat. “Not me. I don’t know him.”

The man beside him laughs. “Well, that’s funny; you talk just like him. What’s a country boy like you doing in Jerusalem – at the high priest’s house, no less – just when Jesus shows up?” His hand moves to the hilt of his sword.

It took only an instant, but I will always remember. You choose to be brave; you pray to be brave; but to be afraid, you do nothing. Fear takes over, speaks for you, gladly sacrifices everything that is not you.

I felt a flood of relief as they turned away, but then I glanced across the courtyard to see a bleeding face; looking at me, heard the shriek of a rooster proclaiming the day of his death.

I had one thing to do, and I failed.

He had one thing to do, and he did it. That afternoon, as we stood staring, he died for us, who betrayed him.

How I wept. It looked like the end of the story, but it wasn’t, and a few days later, I saw him on shore, waiting for me.

He did not speak of the promises I had broken, the arguments I had lost, the friendship I had denied. He spoke kindly to me, spoke only of love, but I could not forget.

At LIFE International, we are thankful for second chances. Though Peter was extraordinarily brave in his attempt to remain near Jesus, he ultimately failed, just as we often fail. But no failure is final with God: His mercy is great toward those who admit their mistakes and turn back to his love.