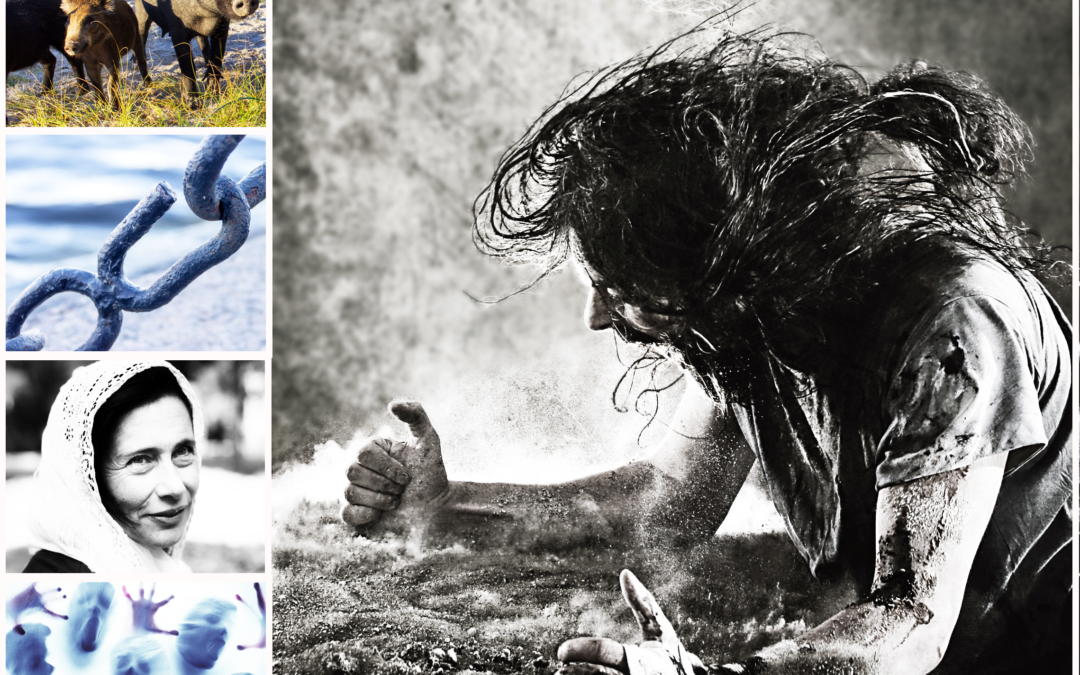 It was like a knife pushed in slowly, a fire penetrating my chest that made me howl and strike out in a blind rage. But there was no one to strike. The enemies were already inside me.

I dreamed sometimes, and I think they could not see it because I dreamed of home, and for a moment, I could see my father’s face, feel the warmth of a robe around my shoulders. But soon, the cold and dew would drag me from sleep, back into my misery.

I woke hungry and spotted some pigs watering at the lake. I snuck through the tall grass, then sprang out and caught hold of a small one, wrestled it toward deeper water. Between the splashing and shrieking of the pig, the boat was almost upon me before I saw it. Or, as I should say, before they saw it.

I felt them shrink back as a man stepped from the boat. He looked at me, and somehow, I could tell he was also looking at them. There was no knife in my chest now; I could feel their terror of him, and I trembled with their trembling.

“Get out,” he said in the calm voice of a king, and I could feel his words roll over them like a wave.

Most cowered, but the strongest one opened my mouth and threw me to my knees. “Son of the Most High God,” I shouted, “why bother with us? We’ll go; just don’t hurt us. Let us move into the animals.”

I remember all of this like a dream and, when the man nodded, the dream was suddenly over. I felt them go, heard their vile whimpering and squawking shooting off in all directions. My mind was strangely still, filled with a vast, white quiet.

But something was happening behind us. A rumbling, squealing stampede of pigs pounded madly down the hill and over the steep bank, an avalanche of legs and bodies twisting through the air, splashing into the lake. Their herders stood helpless, hands on their heads, staring in disbelief.

I stared, too, then I turned to look at him and saw that he was looking at me. A faint smile spread over his face, and he said, “Hello, friend. Are you all right?”

It suddenly occurred to me that I was naked, but one of his friends was already holding out a cloak. I turned away, embarrassed, and threw it on.

Of course, he was the king, and everything obeyed him. Even so, we sat together on the shore for a while, held a fish over the fire, and talked like friends.

People soon began to stream from town, coming to gawk at the thick tide of pigs, bobbing dead in the water. When they saw us talking, their awe turned to fear. Better a madman you can outrun, I suppose, than a calm king you cannot outrun, a king who sweeps devils and beasts into the sea without raising his voice.

That he used this great power to heal me meant little to them, and they begged him to leave. I cringed for a moment, wondering if he would sweep them, too, into the sea, but he was as gentle as he had been with me. As he got into the boat, I begged to go with him, but he said no, that I must stay and tell what God had done for me.

And so, I am limping toward my father’s house – a warm robe around my shoulders and the chain still dragging from my leg – wounded but free. I imagine the look on my mother’s face when she opens the door, and I walk a little faster. It has been a long time since I felt myself smile.

At LIFE International, we understand that this world is more than matter. Each one of us has a spirit that either honors its Creator or lives in rebellion against him. We exist to help people see Jesus – his authority and his love – and invite them into the peace and freedom for which he made us.

This story is a dramatization of a healing recorded in Matthew 8, Luke 8, and Mark 5.

← Paralyzed I am here to do one thing →