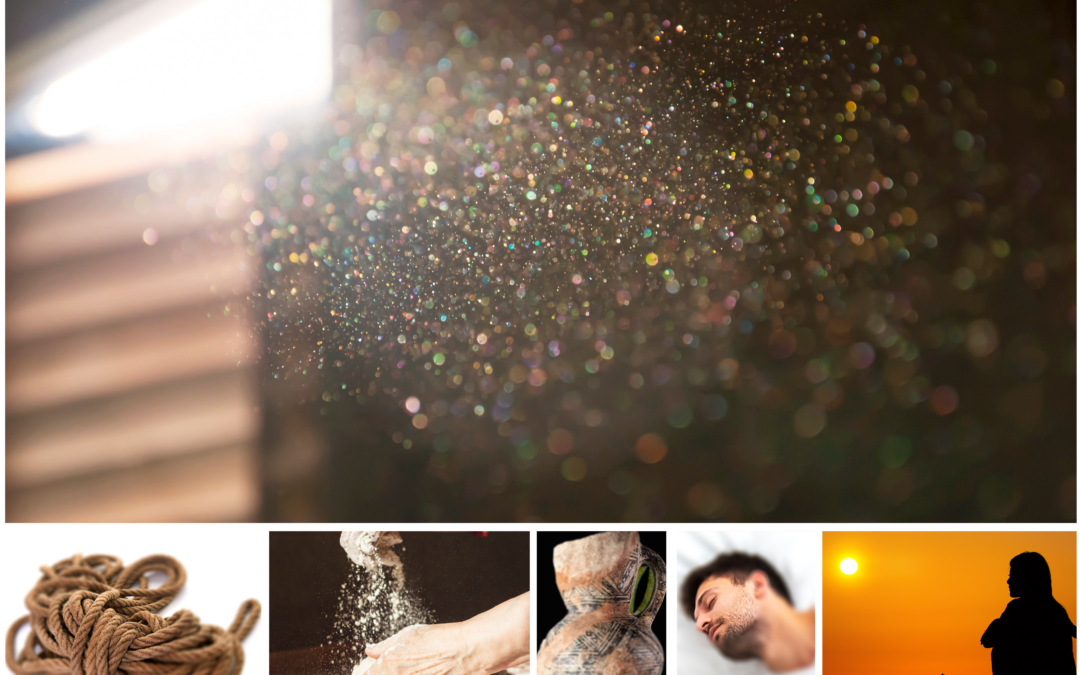 Outside, the sun slinks past; its white rim catches in the corner of the window, sends a sharp finger of light creeping over the floor. Across the room, my mother’s silver head bobs over a tray of flour. A weightless crown of barley dust encircles her, rises sparkling into the beam of sunlight.

I fear I am losing my mind; the hours are so long. I know the jar does not see me, but – better than anyone – it knows my story.

It was the last thing I saw that morning – not my mother who called me, but the water jar I knew she wanted me to fill. I rushed out, as usual, pretending not to hear.

It was the first thing I saw that afternoon. After the fall, my friends carried me home, whimpering and helpless; my strong back snapped in some final way. They laid me gently on the floor, facing the jar that now I can never fill.

Since then, it stares.

“Are you all right, my son?” Her everyday voice shatters the wild visions that form in my head. The water jar is just a jar. She lifts it to splash a little water into her dough and begins to knead.

“Do you know?” she says, in her singsong way, “The Prophet is near. Martha was telling me one of his stories this morning.” She stops speaking, though her shoulders continue to roll, her hands slowly working the dough. Her gray head nods with the work, with the story which I can see pleases her.

“A holy man, he marches to the front of the temple, you see, and he prays a holy prayer.” She raises her hands in a grand gesture, the flour on her fingers glowing white in the sunbeam. Her head begins to nod again, and she lowers her hands, “And there is another man there, too. A sinner, kneeling in a dark corner, his eyes on the floor.”

There is something in her voice that brings tears to my eyes, or maybe it is the sinner in the corner who suddenly feels like me. I think of the way my mother’s hand goes to her back when she sets down the jar, the swollen eyes from tears she will not show me, the unspeakable things she does to keep me clean.

She nods again, and I see her face relax. “The Prophet, he tells this story, and he asks the people which prayer God heard.” She draws a forearm across her eyes, nods again. “He hears people like us, my son. He hears us.”

I pretend I do not see her weeping, just as she pretends not to see me, and the finger of light creeps further across the floor.

I hear pounding feet in the street, a man calling my name. “Jonathan!” he yells, and others laugh. “Jonathan! I hope you’re dressed!” Grinning faces appear in the doorway; Yov and the boys. “Hello, Mother!” he calls in his mischievous way. “Can we borrow your son?”

“What do you idiots want?” I growl, confused.

“The Prophet is here! Came this afternoon, and he’s just down the street, healing people! And you’re going!”

You have to understand that when Yov has that look on his face, there is no reasoning with him. Not that I don’t want to walk, but I’m not really sick. My fall was a punishment.

“Mother!” I yell, but she is already shaking out a clean robe and scurrying toward me. “He won’t want me,” I say. “This is different.”

A moment later, I was in the sunshine, bouncing along on my cot. Yov, of course, was in front, by my head, and the others hurried to keep up.

“I had no idea you were so heavy!” he said, grinning down at me. “I’m already exhausted! But maybe you can carry me home!”

I used to be good at that kind of conversation, but I’ve lost the knack somehow. Yov and the boys still come to see me, but it is a strain to talk as we used to. I am sometimes relieved when they go.

We continue toward the growing roar of the crowd, turn a corner, and abruptly stop. I see Yov’s face fall. “Where did all these people come from?” he exclaims. “I can’t even see him from here.”

I thought he was listening, but I should have known better. “Oh, no, my boys,” he finally said, his usual impish grin returning. “This is the day!”

They laid me down, and I saw him run to a house and grab a coil of rope. He pierced each corner of the cot and cut the cord into two lengths, pushed it down through the cot and up on the other side, then over each man’s shoulder. “You see, boys? We have plenty of rope. Now, to that roof!”

How many times we were cursed, I don’t know, but we pushed through that sea of people, and I began to hear a man’s voice wafting over the crowd. He did not strain to be heard, and he spoke slowly as if he wanted them to think. Often, there was humor in his voice, and the people roared in appreciation. For a minute, I forgot why I was there.

Yov did not forget. I saw the sweat running down his face as he pulled the other men along, having finally reached the stairway. Up we went, panting and straining, and I had no idea why.

“Yov, thanks for trying, but now what? He can’t see us up here, you know.”

“Oh, he will.” He stepped quickly along the edge of the stone – as I had stepped the day I fell – and he began to yank stuccoed fronds right out of the roof and toss them aside, layer after layer until you could see right into the house!

“Quickly!” he said to the others. “We’ll stand like so and let him down, hand by hand. See?”

And down I went, out of the blazing sun, into shadow, into the cool of the room, swaying on my flimsy cot. Dust from the broken roof fell swirling in a beam of light. There were angry voices near me; people scurrying and pushing to get out from under me, a long-nosed Pharisee scowling from inches away, then turning away in disgust.

I felt a hand under my head as the cot reached the floor, and I turned to see another face. It was not unfriendly, but… All that I had feared in coming; the knowing that I deserved all this – I could see it in those eyes. He saw what I was, and he looked at it with me, and the tears that ran down my face were the only answer I could give to the question he seemed to be asking.

Only then did he smile. “Take heart, son. Your sins are forgiven.”

There was a collective gasp in the room, and I turned to see the Pharisee jerking his head, this way and that, making sure everyone had heard.

“This surprises you, that I can heal a soul? Is that harder, you think, than healing a body? But I want you to understand me, and I want this man, who is now forgiven, to be free.”

Then he nodded at me, and I realized I was sitting up. Almost without thinking, I stood to roll up the cot, and as I gathered the ropes and tucked them under my arm, the roar in the room grew louder and louder.

I leaned back to look up into four wild faces poking into the room from the sky above. When I looked back at Jesus, he was looking at them, too, and I thought there was something of their wild love reflected in his own face.

He put his hand on my shoulder and said, “You are twice-healed, son. Now, go home. She is anxious to know if I heard her prayer.”

At LIFE International, we honor the example of Jesus, who gives life to our souls and bodies.

This story is a dramatization of a healing recorded in Matthew 9, Mark 2, and Luke 5.