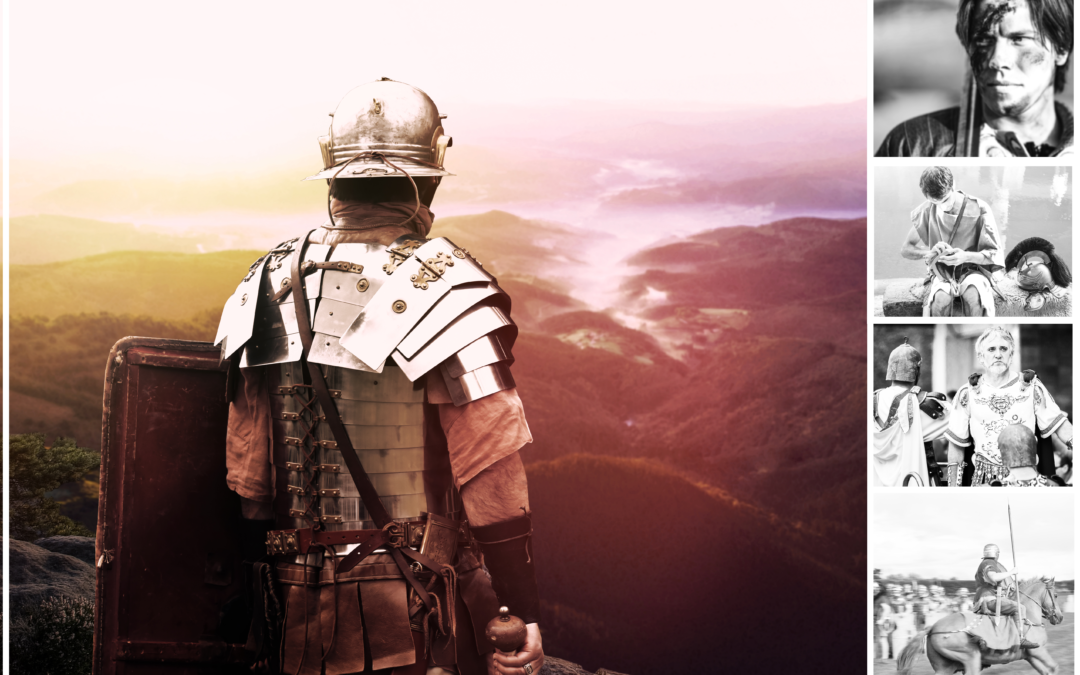 I try not to teeter as the commander steps toward me.

“You are well, soldier?” he says, his face grim.

“Yes, sir.” In fact, I am not well. The battle was fierce. One arm hangs limp. One eye does not work at all, and I smell blood running down my face. I fear I may faint.

He studies me for a minute, nods. “Remain behind.”

That was my first promotion. I would have given both arms for that man, at first because he was Rome and, later, because he was himself – a grim but dedicated father to his troops.

A man does not mind bleeding for something higher than himself, and he was higher. When he died a few years later, I was given his place and began to learn how little Rome deserved him. Yes, we were strong and brought prosperity to the nations we conquered, but I never found in Rome the higher thing I longed for.

For some years now, I have been among the Jews. They are a strange people, but I understand them. They are fierce and stubborn, willing to bleed for something higher. They caused trouble for my predecessor, but I helped them build a synagogue. At first, my commander laughed, but seeing how they now honor and obey me, he has decided I am a genius.

I am no genius, but I understand respect. Consider my servant. He is not strong, but he is brave and faithful. Somehow, he thinks me worthy of his service, and I believe he would give his life for me; be happy, even, to do it. He is as true a man as I am – truer, maybe, because he knows he is dying and does so cheerfully. And whatever is killing him seems to be in a hurry. He has grown so thin.

The Jews are always quarreling, but it is louder now. A teacher has come with new ideas, causing trouble for them and for me. Immense crowds flock to him, which makes a soldier nervous. I sent men to question him, expecting he would run from them or rebel, but he did neither. He calmly told them just what I tell them – to do their jobs honestly and stop complaining about their wages. That surprised me, but it was nothing compared to what happened today.

I was reading reports from our investigation into his so-called healings, knowing how easily rumors spread. Knowing, also, that my men would fall for none of that.

“Marcus!” I yelled, and my lieutenant hurried into the room. “What do you mean by this, saying you confirmed the story? How can you confirm an impossible story?”

“I don’t know, sir. That is, I know it’s impossible, but I talked to the man and his parents and his neighbors and…. Well, they all say the same thing, sir. It’s the same man, except now he can see.”

“No, wait, I’m talking about the man who couldn’t walk.”

“Oh! Sorry, sir, but it’s just like the other one. I talked to lots of people, and they all say he was paralyzed, but I watched him prance around, grinning like a monkey. If this is a trick, the whole country is in on it.”

There is a crash in the hall, and I jump up to see my servant clinging to the wall. He glances at me, grimaces, wobbles to attention.

“James, are you all right?”

He teeters under his small load and sweat stands out on his forehead. I want to help him sit, tell him to rest, but it seems we are beyond that. He is dying, and he wants to work, and I will not take this from him.

Marcus hovers nearby, looks away, seems embarrassed by my sorrow. “Will that be all, sir?”

I stare at my man, think about what Marcus has told me, remember my old hope that, somewhere, there is something higher.

“No. Wait while I write these notes. Take the first to the synagogue leaders. Then follow them and give the second with my compliments to this man they call Jesus. Ask him if he would be willing to heal my servant.”

Marcus takes a step back, surprised, seems to swallow what he was going to say. “But don’t you want to ask him, sir? You’re a centurion, and the Jews trust you.”

“No, Marcus. If this man is as you say, I have nothing he needs or fears. Approach him as you would the emperor and hand him this. He will do as seems best to him.”

Marcus hurries out, and I find another servant in the garden, tell her to help James to his bed and not let him up on any account. I walk for a long while, troubled in my mind, often looking down the road for Marcus to return.

I hear something behind me and turn to see James carrying more water. A roar rises in my throat, but I stop when I see the smile on his face. The ruddy skin, instead of white. The largest urn, strapped over his shoulder and filled with water.

He stands straight, straps cutting into the skin on his shoulder, and it occurs to me that he will stand there all day if I don’t release him, but I am astounded and barely able to speak.

“I am very well, sir. Thank you.” There is an awkward pause as I continue to stare. “And, begging your pardon, sir, I’ve gotten a little behind lately, so….”

“Oh, of course, James,” I say, shaking my head and trying to force a grim expression onto my face. “Of course. You are dismissed.”

James strides quickly away as I turn to see dust rising from the road; Marcus galloping madly, thinking he has news for me.

At LIFE International, we recognize Jesus’ complete authority over the material and spiritual worlds. Like the centurion in this story, “we have nothing he needs or fears.” His compassion toward us does not depend on our worth but on his great love and mercy.

This story is a dramatization of a healing recorded in Matthew 8 and Luke 7.

The God who made the world and everything in it, being Lord of heaven and earth, does not live in temples made by man, nor is he served by human hands, as though he needed anything, since he himself gives to all mankind life and breath and everything.
-Acts 17