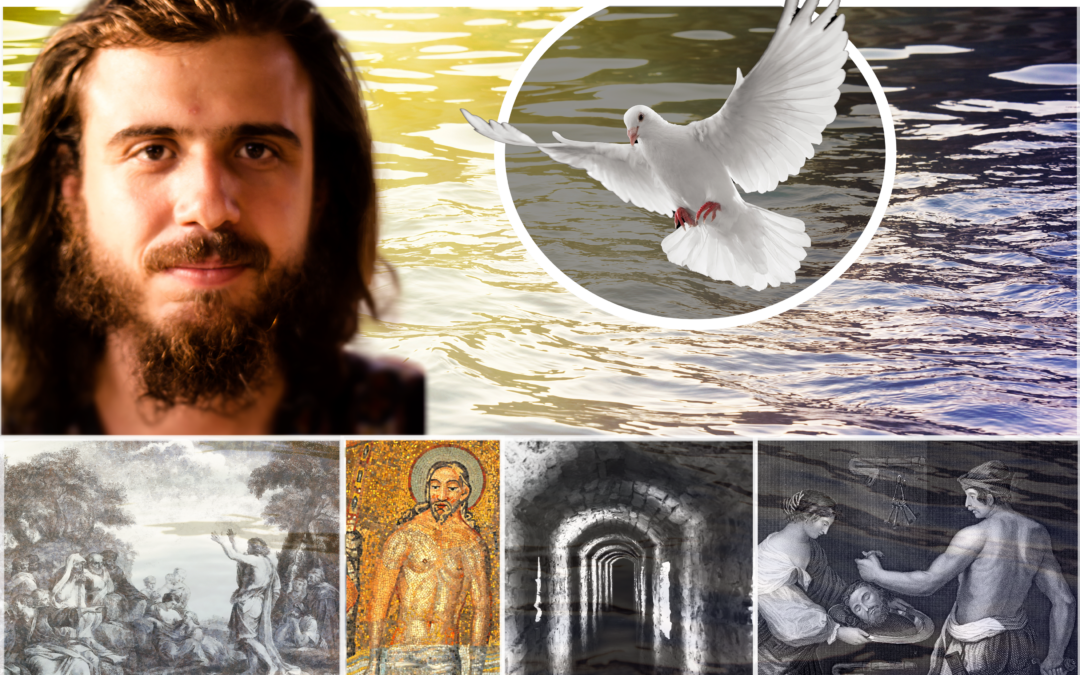 A clatter of boots echoes down the stone hallway, grows louder, stops.  The man handcuffed beside me jerks his head toward the door, eyes wide.  Normally, the jailer shuffles, but tonight he walks fast, and a heavier stride follows him.  This usually means that someone is about to die.

It might be me.  I am 30 years old with no sweetheart, no home, no job of the normal sort.  I have grown wild over the years, wearing animal skins, eating grasshoppers like the poor.  My words have made dangerous enemies, including the king.  I did not aim to be wild, but I am haunted by the idea that something is happening – something too big to imagine.

I say haunted because it’s not just an idea.  There is something alive in me, something that stirs and shrieks at this death they call life, their open eyes that don’t see, their lies about God.  I am a sword thrown from heaven, cleaving their religion from his.

And I have seen a ghost.

I was in the river, washing those with the sense to be terrified, when he appeared – the one who has no need of washing.  He told me to baptize him, and then I was the one terrified.

It was too big to imagine, that I should touch the holy one of God, let him sink beneath the waves, sanctify him.

Or that the air of an ordinary afternoon should ring with God’s own voice, though some said it was only thunder.

Or that the ghost of God should streak from heaven, bright wings flashing, and come to rest on a wet man in the form of a common bird.  I stared at these things, amazed, though they seemed ordinary to eyes that will not see.

When Jesus walked away, I knew my time in the wilderness was almost over.  He had really come, the spotless Lamb of God, and he would soon take away the sin of the world.  I had been sent to prepare the way, and the way had been prepared.  I had seen him and touched him, and my joy was now complete.  He must become greater, and I would become less.

At the door, there is a jangle of keys. “Wake up, preacher!  You’re gettin’ out of prison!”  The jailer’s laugh smells like garlic, his body like fish.  “Parts of you, anyways.”

I cringe, but whatever is alive inside of me stirs and tells me, “Yes, John, it is time.”  And so, my last walk.  Down the cold stone hallway and into the flickering torchlight of the courtyard.  A heavy soldier waits, leaning on a heavy blade, his foot resting on a wooden block.

For Herod, my execution will be a sword thrown at heaven and, for a moment, it will seem to work.  One last time, the king will see my face.  And, like him, my eyes will be open, but I will not see.

The guard gives me one last shove, and I kneel, lay my ear on the cool wood.  The moon stares from a hazy sky, and I feel the night breeze wash over my skin.  This is not the door I would have chosen, but in a moment, I will step through – out of the wilderness, and finally home.

At LIFE International, we try to honor John’s wise formula that “he must become greater, and I must become less”.  However hard we might try, we are powerless to accomplish our mission; only the brilliance and mercy of Jesus can produce the life-giving transformation our world needs, and we do best when we direct attention to him.

← Multiplying Champions for Life in the Nations With Us →